You are here:
World News 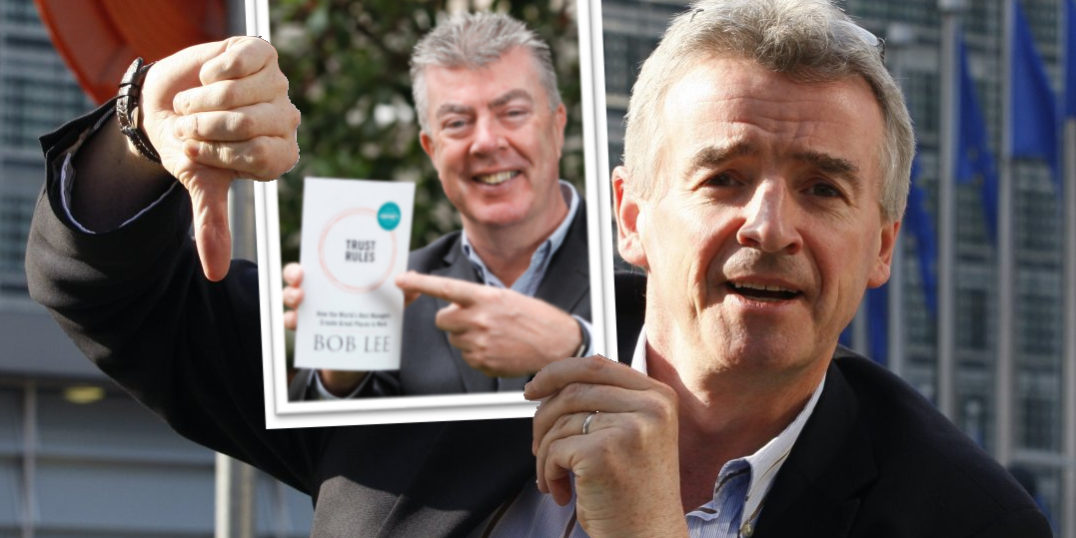 I wrote Trust Rules as a guide for managers on how to harness the power of trust and lead their teams to achieve extraordinary business results. It’s selling very well but I sense that Ryanair CEO Michael O’Leary hasn’t discovered it yet!

Most of us work hard, most of the time. And although we don’t expect constant praise or gratitude, it’s nice when it happens. Few of us are thanked or praised often enough or well enough, but Michael takes ‘non-praise’ to a new level:

“MBA students come out with: “My staff is my most important asset.” Bullshit. Staff is usually your biggest cost. We all employ some lazy bastards who need a kick up the backside, but no one can bring themselves to admit it.”

And, speaking about his own pilots:

“If this is such a Siberian salt mine and I am such an ogre, then why are they still working for the airline? If any of our fellas aren’t happy with the current arrangement then they’re free to go elsewhere. Godspeed to them.”

Perhaps that explains his apparent disdain for pilots in general, as evidenced by his suggestion “Why does every plane have two pilots? Really, you only need one pilot. Let’s take out the second pilot. Let the bloody computer fly it.”

The justification for treating everyone fairly is simple – it’s the right thing to do! And although ‘fairness’ is about much more than remuneration, it’s hard for us to see beyond it if we don’t feel that our pay is fair.

Not so long ago, Michael seemed proud to admit that his pilots were underpaid, boasting: “People ask how we can have such low fares. I tell them our pilots work for nothing.”

But Michael is consistently consistent – he doesn’t regard his own pay as fair either!

“I’m Europe’s most underpaid and underappreciated boss. I’m paid about 20 times more than the average Ryanair employee and I think the gap should be wider.”

Work affects the personal life of every employee on your team, and their personal lives affect their work. High-trust managers show respect for the whole person by helping them to balance these often-conflicting responsibilities.

Michael isn’t a big fan of soft and cuddly benefits like parental leave:

“We have paternity leave but it’s a bloody joke. It is bullshit legislation. You need a couple of days off because you’ve had a baby, but this nonsensical rubbish that you’re entitled to days off for the first six years of a baby’s life. Go and get a bloody job – get a life.”

My research shows that one of the most effective ways to support your team in achieving work-life balance is to lead by example. Michael agrees. Sort of.

“I limit my holiday to two weeks and then get the hell back to the office. If I had my choice I wouldn’t take holidays but my wife insists on time with the kids. That’s enough. Prior to getting married I never took a holiday.”

So, no plans to introduce paid sabbaticals for long-serving staff either, Michael?

Rule #16: Have Fun Together

Managers everywhere struggle to wrap their heads around the concept of ‘fun at work’ but it’s not complicated. Fun at work is simply the freedom to be yourself at work – the freedom to take a moment to enjoy a laugh together, for example, or engage in light-hearted banter with your colleagues.

When asked the best way to keep employees motivated and happy, his answer was characteristically blunt: “Fear.”

Your employees need to know what you expect of them. In fact, they have the right to know, because how else can they succeed in their role. Michael seems to get this point!

When a Ryanair employee decided to join a Twitter Q&A session, Michael’s immediate 45-character response left no room for misunderstanding his expectations, tweeting “Get back to work you slacker or you’re fired.”

What next for Ryanair’s under-appreciated Pilots?

There are reasons to be optimistic. In 2014, recognising the link between ‘being nice’ and ‘making money’ Ryanair launched its Always Getting Better initiative, eliminating some of the things that had contributed to the airline’s ‘gruff and ready’ image. It worked, prompting O’Leary to admit:

“If I’d only known that being nice to customers was going to be so good for my business I would have done it years ago.”

It worked for customers, so don’t rule out a similar Pauline-conversion when it comes to staff relations.

I’ll be sending Michael a copy of Trust Rules and I’ll let you know if I hear anything back. But let’s be realistic here – I don’t expect a call asking me to help him to sort out the deep-rooted trust issues that plague his business and threaten to seriously restrict Ryanair’s growth.

Why not? Because his views on employees are positively touchy-feely compared to the special place in his heart reserved for consultants:

“Every idiot who gets fired in the industry shows up as a consultant somewhere. I would shoot any consultant who came through my door.”

I’ll stick to the writing so, Michael.